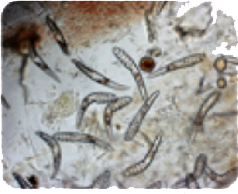 Sudden onset of Demodectic mange in adult dogs often warrants further investigation! Demodex canis are part of the normal fauna in canine skin and present in small numbers in healthy dogs. However, under the influence of hormonal/immunologic changes or concurrent disease. the demodex population can increase dramatically causing skin disease in dogs.

Owner reported that Mugi had been drinking and urinating more frequently. A comprehensive blood test, urinalysis and a low dose dexamethasone suppression test confirmed our suspicion. Mugi had Cushing’s syndrome. Cushing’s syndrome is a common endocrine abnormality in middle-aged dogs. It involves the secretion of excessive circulating glucocorticoids. The clinical signs include increased drinking/urinating, abdominal enlargement. weakness, skin and hair abnormalities, excessive panting and neurological signs. They may not always occur together. Mugi only displayed a subset of the above mentioned signs.

Mugi was placed on a lifelong medication known as trilostane. Till now, we see Mugi every few months to monitor her progress. Treating these patients may reveal other problems that were masked by Cushing’s. In Mugi’s case, her previously well-managed arthritis appeared to worsen; she could not walk. This is because glucocorticoids are effective anti-inflammatories! We managed Mugi’s arthritis with weekly PSGAG injections and acupuncture. Mugi was able to walk again.

Mugi’s skin improved leaps and bounds from bleeding sores to having fur on her paws. She also does not drink or urinate
excessively anymore.

During a routine recheck examination, our veterinarian palpated a mass in the abdomen. X-rays revealed that it was a splenic mass. Its malignancy is unknown. A splenectomy surgery was done to remove the spleen (yes! They can survive without a spleen!). Histopathology tests revealed that it was a benign mass with haemorrhage. Although the mass was benign, it could haemorrhage or rupture leading to life-threatening anaemia.

The take home message: THERE IS MORE THAN MEETS THE EYE.

Some skin problems may have hidden underlying causes. This is why we need to perform skin scrapes and other diagnostics to rule out the etiologies. Drinking more water does not necessarily mean your pet is in better health. Chronic kidney failure, Cushing’s, diabetes, and urinary tract infections are examples of diseases that can cause increased drinking. If you notice abnormal signs, consult your veterinarian!

Routine physical examinations are recommended to pick up early signs of disease. Not all diseases show clinical signs early. Early detection is better than cure.