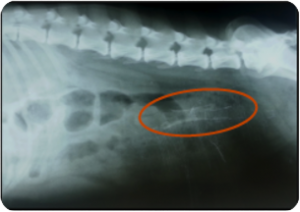 John, a bubbly French Bulldog, came to see our doctors because he was not eating for two days. He also vomited bile twice 3 days ago. John is an inquisitive sniffer and scavenges on walks! During the examination, his abdomen felt distended and he had watery faeces. He was running a mild fever as well.

A simple xray reveals that John has eaten a yummy chicken bone during a walk but got lodged in his intestines! There was also an accumulation of air in his intestines due to the obstruction. A surgery was performed to remove the lodged bone. A sharp splintered edge of the bone had already perforated through the intestine and brown intestinal fluid was leaking from the wall. After the bone was removed, the intestinal wall was sutured close to ensure no leakage occurs. John stayed in hospital for another 4 days to monitor his recovery.

John recovered uneventfully and his temperature returned to normal.