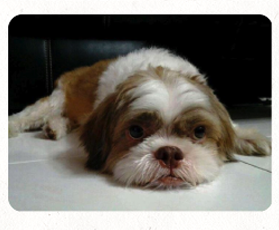 Joey De Costa presented to us collapsed. He had been extremely weak, unable to stand for the past 3 days. He was having seizures during his journey to the hospital. Upon examining Joey, he was extremely pale in his gums, completely flat lying down and he was acutely blind.

Joey had been treated at another vet clinic for Demodectic mange (yes, Mugi had this too!). A drug called ivermectin is commonly used to treat this problem. Certain breeds of dogs such as Collies, Shelties, Australian Shepherds and dogs with white feet are extremely sensitive to this drug due to an inherited genetic defect. In ivermectin sensitive dogs or dogs that received high doses, acute toxicity signs include neurological signs. dilated pupils, lethargy, severe ataxia (wobbly). tremors
and death.

Joey’s clinical signs were consistent with ivermectin toxicity. Joey’s owners were extremely worried for him. His condition was critical. A comprehensive blood test was performed to rule out other underlying etiologies that could have possibly caused Joey’s signs. It turned out Joey’s liver enzymes were out of range. Joey‘s haematocrit (RBC%) was 10.2%. This warranted a blood transfusion to stabilize his condition before further diagnostic investigations. Further diagnostic work ruled out other etiologies such as liver dysfunction and Cushing’s syndrome.

Treatment against ivermectin toxicity is aimed at supportive therapy. Joey was on intravenous fluids, manual feeding using a feeding tube. and supplements to support his liver function. 4 days later, Joey was eating on his own, walking around. Against all odds, Joey bounced back into his usual bitey self. His liver enzymes were tested a month later and they were normal!

Joey is not the friendliest of doggies however, so long as he is happy and healthy, we are happy that he has the most loving family to care for him.