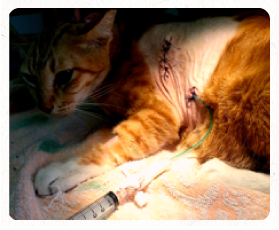 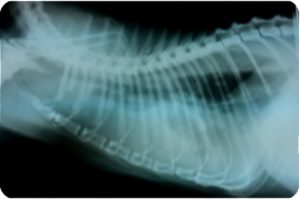 Tiger is a well-loved community cat. Tiger was hospitalized for 10 days at another vet clinic for treatment of his cat tight abscess. His caregivers were advised by the clinic to seek further treatment as his condition took a turn for the worse. When we first saw Tiger, he had severe inspiratory effort with rapid shallow breathing. There was a large open necrotic wound on his left chest. Our suspicion was confirmed on the x-rays and cytology.

Tiger was diagnosed with pyothrax (pus in the pleural cavity).

An intravenous catheter was placed and he was connected to fluids to rehydrate him. He was also placed in an oxygen cage. Unfortunately for his owners, the outlook for Tiger’s condition did not seem favorable. He was lying in lateral recumbency and in severe respiratory distress. We had to drain Tiger’s pus from his chest immediately under anaesthesia otherwise he will die. However. anaesthesia also posed a significant risk because Tiger was already severely compromised. His owner chose to give him that chance. 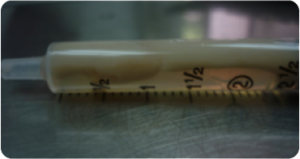 We had to place 2 indwelling pleural catheters into Tiger’s chest. We drained 120mls of pus from the right half of Tiger’s chest and lavaged it well. As we proceeded to repeat the procedure on the left half. Tiger went into acute cardiac arrest (his heart stopped beating). We immediately tried to resuscitate him. His condition was critical. 20 minutes into resuscitation. Tiger’s heartbeat returned! 227mls of pus was drained from his left half and lavaged. Although Tiger recovered from anaesthesia, he was not out of danger. After one day of intensive care, Tiger’ temperature returned to normal. He was bright. alert and eating voraciously! His chest was lavaged daily. Tiger went home 4 days later, a happier cat!

Cat tight abscesses are very common especially among male cats. They can be serious enough to cause septicaemia and death. Feline immunodeficiency virus (feline AIDS) is very commonly spread by cat bites/claws. Feline AIDS is very common in the community cat population in Singapore.